Cover of the album "Dale like", by Charanga Forever.

The dance music in Cuba received a strong blow at the end of the 1990s after the split of the Charanga Habanera in 1998 (divided into Charanga Habanera and Charanga Forever). Such rupture caused the loss of an interesting evolutionary line of son within the Timber movement of this period. This variant, which to some extent had been conditioned by the instrumental format that had been nurtured in its infancy (typical charanga), reached a remarkable conceptual value and a contribution to the balance between the different orchestral approaches of this decade. The Charanga Habanera of those first 6 years, between 1992 and 1998, became the strongest sonority band achieved especially at the end of this six-year period - of course, always after Van Van. All without drum and without a bass guitar, nothing simple. The suspension for six months after certain acrobatics of Michel Maza and his attempts to develop in a massive concert in La Piragua did not daunt the "elegant of the track"; the reincorporation after that recess brought them back with an unusual sound reinforcement (remember: Mother in law and The pallet). David Calzado was proud at that time to say that La Charanga Habanera did not timba.

The schism, given between David and all his musicians (with the exception of the singer Michel Maza), caused the director to have to rethink several concepts for his new orchestra, which of course, would continue with the same name. A new way of laying on the ground began, more cut in the montunos now (in the long run Pedro Pablo Gutiérrez would seem irreplaceable in the two groups, after leaving the Forever shortly after having emerged), blows in the same for greater coverage during the masacote, a timpani less protagónico and restless this time, new hollows, especially in the presentations live, new timbric of the band in general sense, although the march stayed equal of closed. It was as well as a great public relations campaign of the tireless Footwear, together with a very different leadership, in the musical and administrative sense, of what was called Charanga Forever after the break, led to that interesting experience, already bifurcated, in other directions. In definitive, La Charanga Forever and the type of music he tried to defend, were the big losers. David was the head; David could change his concept, musicians, and subsist easier than what another could do by appropriating his already accomplished.

However, the Forever's first album The Charanga is me (Caribe Productions, 2000), created a lot of expectation. Although it was not up to the closest previous reference (Charanga Habanera, Tremendous delirium, 1997) in terms of mixing and mastering, the compositions, despite not having the same promotion threads, were not only more tasty and authentic, but also more solid and of greater musical value. There was an evolution. Although unfortunately there is a distance, not only temporary, between that first album of the heirs of Calzado and his latest record productions, listening to Forever always brings some reminiscence of that strange timbera derivation, something minimalist from the rhythmic point of view if you compare with the ecstasy in which he submerged the public. However, the oversights in his last record production, Like it (Bis Music, 2019), at this point they are unforgivable, especially if one takes into account the quality gains in the different fronts required for the production of a phonogram in the national record companies. It is not a matter of being excessively rude with the boys of Bocalandro, but, less and less, the singers' detunes can be justified in a phonogram of this nature, as if there had not been time for the rectification of the error. There is a mismatch in the choirs, inaccuracies in the metals, while the air of the songs is too far ahead (fast tempo); both the Habanera and the Forever frequently used slower themes occasionally to exhibit a particular cadence (with interesting sonar approaches).

This line initiated by David Calzado in 1992 has always been characterized by a stable and repetitive harmonic chaining, and to a certain extent, it can be said that the conception of the rhythmic framework goes through a similar planning. The union of both elements has proven a high degree of efficiency in the dancer, who also appreciated, from those early days, the saturation of baby bass and bass drum as the perfect complement to that synthesis. However, it is not perceived on this record that there is the slightest attempt to oxygenate such a conception. And there is the challenge of any Cuban dance music group in recent decades: how to maintain a seal and not repeat at the same time. Unfortunately, this is what has happened with the last three phonograms of the Forever. All the songs on these albums are extremely similar. There is no attempt to make a variation in the entries of the songs, nor in the sequences of the percussion, the effects, and so on. The structures of the compositions, once past the first montuno, are the same as always and easily predictable.

Sometimes a sticky montuno, a phrase that hooks the audience or the compositions themselves can become the saving board of an album; This can be more difficult to achieve than a quality arrangement and technical care of the music, because it depends on inspiration and talent for the composition, it is not seen on this album either.

Charanga Forever deserves not only one, but several opportunities. For those who follow only the first line orchestras, the guys from Bocalandro, who have an active agenda of presentations outside the island, may be another group within the rearguard platoon. However, it turns out that the idea they are trying to defend still holds some appeal because it is connected with a very specific way of defending the timba, beyond the limitations; and perhaps, from the point of view of a certain collective memory, it gives us back those 90s of the last century in which this music, in massive and frequent dances, left a certain mark on the dancers.

I am of the opinion that any attempt to rethink this group should go through a study and morphological dismantling of bassist Pedro Pablo Gutiérrez, who was ultimately the backbone of that first Charanga Habanera and the first album of the Charanga Forever. The approach of the percussion, the type of march and other so many rhythmic, harmonic and even timbral intricacies, were structured in this line through the strong musical personality of this bassist who became a key piece in the arrangements of the two groups . And we're not talking about his unusual ability to do slaping with two hands in the baby-bass, nor his virtuosity by placing as many notes as possible in certain passages, but of that know-how that is sedimented when a bassist who knows the tradition that precedes him, manages to overturn it in a new context and create something new, that is never new at all; when he manages to find not only the exact note for the tumbao he wants to create, but when he knows how to omit or delay (in the wake of Israel Lopez Cachao, Juan Formell, Humberto Perera, to name just three.)

While it is true that in this type of music almost everything seems invented, I think that, at least, on this album, Like it, they could have taken care of a whole group of technical-musical details that are not precisely associated with creativity and talent, but with the minimum experience imposed by a scene and a recording studio. Because, in dance music, we, the islanders who consume it in a sense that goes beyond the fruitive, we appreciate certain formal questions when there are content difficulties. For others it can still be something exotic. For us, it's our music, definitely. 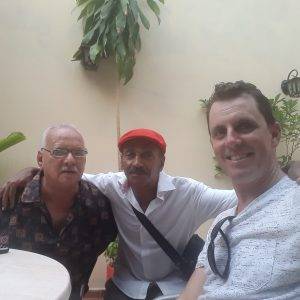