It is said that metals are sweet when they do not have impurities, and I have always wondered why trumpets, when they are very used, have that tender sound that does not become gentle, but that inevitably leads to a kind of peace. Almost blue .

One day I was going down a very large street, my P4 bus had gone and the taxis were worth more than my bag with everything inside. I sat scared on a little ladder that overlooked the street — scared that being a woman is a complication, scared of sounds, of shooters, of drunkards… - I remember that I was alone and that the phone's battery was dead. Chet Baker, that's what I wanted to hear. I put my headphones on, straightened out the faulty cable, and played a song. Silence . Here I could say that my fear was removed, that the cars did not bark at me, that the street was not a wolf's mouth, I could say that I felt a stroke of peace, a silence. But no. The fear did not go away, and what scared me the most was that now I felt a stormy peace, a dread similar to that of movie scenes where she cries a lot with a song and discovers that something terrible is about to happen.

A car, a trumpet, two exhaust pipes, a yuma vomiting the Cubalibre [Chet Baker lost his teeth due to having problems with a little gang that sold him the lines of the week], a drunk shouting “baby-what-is-given-is-not-taken-away”. ["Still life hasn't hit you enough, you can't play in this bar"].

Chet Baker was born at Yale in 1929 with the Great Depression and with Black Tuesdays and Thursdays. He was himself a huge, superhuman depression.

He first heard Dizzy Gillespie in Germany. He played on stations set up by the army to keep troops distracted. Some kind of jazz soldier.

He began playing the trumpet at jam sessions at jazz clubs in Los Angeles.

But it was vice that took him away from common life, from payments and fixed days. He hooked up with Charlie Parker, a serious addict. Two serious addicts, Bird and Baker, slamming all the alcohol in the world. Anesthesia. Then Paris was "full of people who got into everything." And so they passed cities and jazz heroes and heroines of the veins, and spirits and beautiful women.

Baker singing But Not For Me , My Funny Valentine , The Thrill Is Gone .

He did all the songs, he composed a lot while melting the cursed drugs in his spoon.

One night, the owner of the hotel where he was staying in Amsterdam kicked him out because he had no money to pay for the stay. Baker paid off his debt with the luggage and the trumpet. They say he died that night trying to climb the wall of the hotel. Others speak of a suicide. I don't doubt anything, although I want to think that he wanted to get his instrument back.

Oh, but I know: those old trumpets sound good because sound travels at surprising speed; sound makes its charges hollow, wormholes, and metal — then — decides to soften its skeleton. Poor me that, no matter how much music I put on, the cars would continue to see me as a busy little girl.

That night I felt fragile on the street and prayed my creed, neither so apostolic nor so Roman. The creed of the cocaine addicted angels, that of the lines that lead to compose more lines. That of the saints who self-destruct so that a pretentious girl listens to a song and builds a different peace, an accelerated peace. Angels to whom one can fail, because the only command they utter is the one that indicates that you have to close your eyes and take a crap, and shout "I'm-tired-of-everything."

Somewhere someone will be playing a Chet Baker song, someone who can be me in a quantum dimension that I don't understand. Oh, industrious little girl, because of that fake Louis Vuitton handbag, the cars continue to believe that you have what to pay for a taxi to the door [if you had a door]; the music leaks through the broken cable and that is why taxi drivers, shooters, sounds chase you. Don't get your hopes up, that trumpet is going to break your mouth, that trumpet is going to leave you glued to the stairs of a third-world Tiffany Club, even if you say no, that nothing strange happens, because that word always sounded like a new song. Do not think that you are going to come out so pristine tonight, because everything that is great has the ability to break its own form, its skeleton: those are the songs. That is great music.

The sounds inhabit you, my invertebrate girl, and they want to break your mouth that you paint yourself as if it were a decaying sexual canvas. Stay on the floor and don't get your hopes up.

Still the P4, as always, arrives almost the next day. 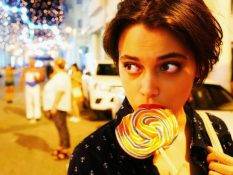 Voyeur of chess games. Stenographer of my dreams. I am afraid of clowns.