Photograph of Elena Burke printed in pulóveres by Clandestina, during the tribute that riddled the Cine Club Festival for its ninetieth anniversary, May 4, 2018. Photo: Fernando Medina.

Elena explains the mess that is between you and me, shows the minimum hope of giving us the good with a boldness that seems out of prison -what is that? -Threads in its thread and so maybe we advance something without moving the place, both full of afraid of you, afraid of being just a toy, as usual

As if nothing Elena has drawn the confidence fallen from a true cliff, not lost between two children who played basketball with the only thing that should be taken care of: it shows the abyss that rarely returns the look when it says, for example, I could think otherwise, be born in another time

And at the time of leaving him at the stop of route 57, with his stage clothes on a hanger, serious and alone without understanding nothing of reality, less of the government and its ruffles, she knows - as only those who were once charred know - that the perennial insubstantial episode that comes after the short great love ends lasts as long as this cigar lasts

With his mockery and total mistrust in the future The Burke about us sings his precarious victory, but victory, victory at last.

Sigfredo Ariel. Santa Clara, 1962. Poet, musical researcher, music lover to the core. This poem is part of the unpublished book You do not govern of next appearance in the handicraft publishing house Cuadernos del Bongó Barcino, Barcelona, ​​2018. 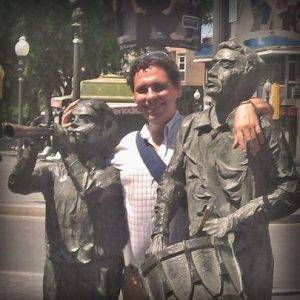