The SGAE and the musical exchange between Cuba and Spain

In the 80s of the 20th century the Spanish musician Santiago Auserón (aka Juan Perro), had "discovered", in the hands of the Cuban poet Bladimir Zamora, the treasure hidden in the voices of the Cuban soneros from the East of the Island, and it had produced -to tell it badly and quickly-, a fabulous reunion of filial cultures in the two editions of Encuentros del Son and El Flamenco, in Seville. The first volume of Semilla del Son, a compilation resulting from that effort, came to light in 1991, but that story is too well told in Seed of Son. How Cuban popular music germinated on Spanish soil (La Huella Sonora Ediciones, 2017) by Auserón himself, so that I can retell it here. The so-called Special Period that devastated Cuba in the 90s, in addition to establishing timba as a popular dance genre (the worse we were the more resounding was the music made by NG La Banda and the rest of the groups that followed that one, the one who commanded) was a significant exodus of Cuban musicians, many of them to the Iberian Peninsula. The settlement in Spain of a group of relatively unknown artists in Cuba but with a very fresh proposal and a lot of anger and accumulated frustrations, took a breath of Latin airs to the emerging Spanish music and provoked, along with the effluvia timberos that crossed the Atlantic , interesting mergers and confluences.

It was the golden age of what they called new flamenco, in which Ketama and Rosario Flores, just to mention a couple of the most prominent and famous exponents of flamenco fusion, introduced blues, rock and Afro-Cuban music in their musical pot and produced a music that made everyone dance and sing. On the Cuban side, Lucrecia fell in love with the Spaniard of all ages and Gema and Pável and the boys who were part of Habana Abierta were the "foreigners" invited to the party. Gema and Pável released with the seal Nube Negra two discs today of cult (Traps of Time and Joke Thing) and also produced Rapindey albums, Omara Portuondo, then Hidden Havana, and many other wonders, including a beautiful tribute to María Teresa Vera that incorporates interpreters from Spain and Cuba. Athanai, the same who had made his debut as a rapper under the production wing of El Tosco before leaving Havana, produced in 1999 the most rock album of Rosario (Playing madness); Chano Domínguez and Marta Valdés recorded in 2001 that marvelous voice and jazz trio that is Tú no sospechas. Havana (already) Abierta was touring throughout Spain, getting a contract with BMG (which had also signed Carlos Varela) and that produced their next two albums (Habana Abierta and 24 horas). The Cuban salsa and timba orchestras had the main cities of Spain as obligatory stops on their tours. Issac Delgado spent some time living in the peninsula and his band in full "stayed" in exile, putting it well in Spanish orchestras of various types (of them, Alain Pérez, the bassist and brother-in-law of Issac, was going to stop touching and turning nothing less than with Paco de Lucía). Cuba and Spain were very close, musically speaking, in those finsecular years.

In the middle of that panorama, at the end of 1997, the General Society of Authors and Publishers (SGAE) opened, in coordination with the Cuban Institute of Music, an office in Cuba. The then president of its board of directors, the Canarian musician Eduardo Teddy Bautista, was, in addition to a fan of Cuban music, someone who had absolute clarity about the fact that the only way to "compete" in the music market with the Anglo-Saxon was to strengthen the circuits of promotion and commercialization of the Ibero-American and Latin music (including those of Brazil and Portugal). And with that vision he led a solid strategy from the organization of Spanish authors that included actions of all kinds.

Among them were contests of different musical genres, scholarships for composers of music in Spanish, the publication of books and records, author weeks, tours of Hispanic music in the United States and other circuits specially created for that purpose (Rock en Ñ, Jazz en Ñ, Fémina), the creation and promotion of MIDEM Latino and the participation of many Ibero-American artists in MIDEM, WOMEX and other international fairs, of which hundreds of Cuban and Latin American artists benefited. All this deployment of resources was not always well seen, it must be said, by the large body of authors of the SGAE, which were the Spanish creators and editors.

In practically all those contests, events, editions, patio artists were represented. Before the beginning of the new millennium, SGAE published for the first time the integral of Cervantes & Saumell: Dances and Contradanzas (editing with care and interpretation by Frank Fernández), published Catalog of works by Ernesto Lecuona and the one corresponding to José María Vitier, as well as those less known in Iberia, Harold Gramatges, Roberto Valera and Juan Piñera. He awarded Gramatges in its first edition the Tomás Luis de Victoria Award, endowed with 100 thousand euros at the time and that 10 years later went to another international Cuban: Leo Brouwer. In the collection The Authors of the then AUTHOR Foundation, books were published on the life and work of Amaury Pérez, Carlos Varela and Santiago Feliú.

In the edition of MIDEM Latino in 1998, SGAE landed in the city of Miami with a Cuban luxury cast composed of Compay Segundo, Omara Portuondo, Chucho Valdés & Irakere and La Charanga Rubalcaba, in which it would be the first presentation in that American city of most of these artists. The Team Cuba de la Salsa, composed nothing more and nothing less than by Juan Formell, Adalberto Álvarez, José Luis Cortés, David Calzado, Issac Delgado, Paulo FG, and Manolín El Médico De La Salsa, with a "terrifying" band was possible and arrived in Europe thanks to the commitment of the SGAE Foundation.

In the last six or seven years, for reasons of various kinds (music industry crisis, economic crisis in Spain, internal crisis in SGAE, crisis, crisis, crisis ...) this phenomenal exchange has diminished a lot, however, Mayté Martín, Ojos de Brujo, David de María, Chambao, Muchachito Bombo Infierno, Marinah and Juan Perro have acted before the Cuban public thanks to support from the SGAE or its Foundation; which organized in 2015 an Author Week in which young musicians from both sides of the Atlantic shared creation and stage and culminated with a concert in the hall of the National Museum of Fine Arts. 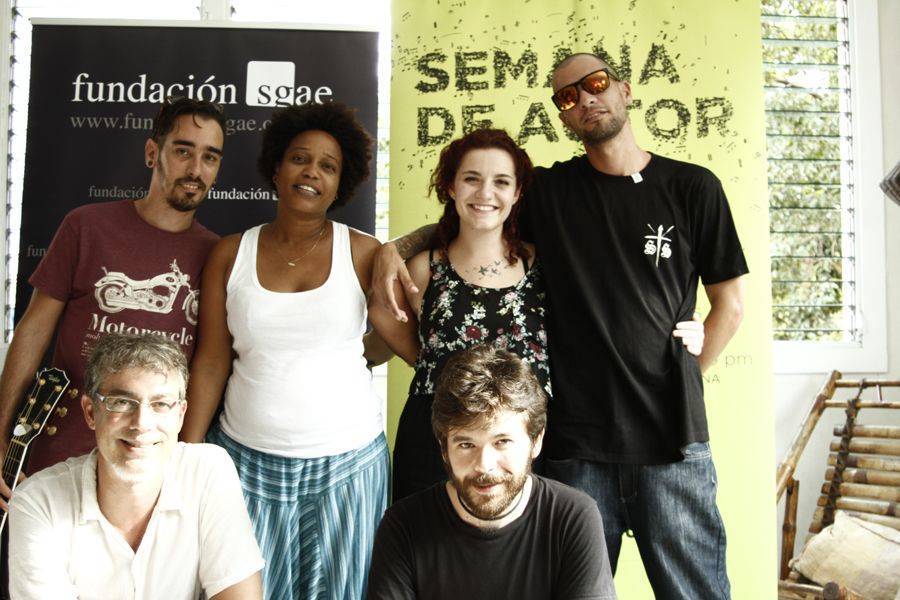 Meanwhile, new Cuban musicians are making their way to talent in Iberian soil and have counted or have counted on numerous occasions with the support of the entity of Spanish authors, who has done on a couple of occasions the cycle "Cuba in Memory" with diverse Cuban musicians settled in Spain. Also in 2016, Ernán López Nussa and his quartet traveled to Valencia to be part of the Jazz event in Ñ; and Fundación SGAE was part of the organization of Silvio Rodríguez's free concert at the Auditorium of Vallecas, Madrid, as part of his Tour of the Neighborhoods.

In times when almost everything we hear from SGAE, at least from the Spanish press, is bad news, it is an act of strict justice to ponder the role that this organization and its Foundation have played in the musical exchange between both countries.

Taking out Telefónica, I do not know another Spanish entity more greedy than the SGAE. I am not surprised by the terrible reputation you have in your own country, if with the digital canon theme, where you can put the spoon to take something pal pocket, so it will.

An embarrassment of organization, that what matters least is culture, as demonstrated.