I was born in a dance. In the Los Hoyos neighborhood of Santiago de Cuba, in Martí and Moncada, where the French-African society El Cucuyé is located. That's where I grew up until I was old enough, that Mom and Dad died. From that moment on I had to leave my studies and find a life for myself, because I didn't have someone who could tell me: continue your studies; life was very different from life now.

I always liked singing. Since I was little I sang, and my mother and aunt sang to me to make me fall asleep. That was my life, although I had to do many types of jobs: selling newspapers, getting into boxing, playing ball ―I have always been very athletic―, always singing and behaving very well, because my mother told me that she did not want to suffer before to die, and I did not want to give my mother suffering. I always kept that in mind.

My dad was a carpenter, a cabinetmaker. My mother was with my father for revenge with my great-grandmother, because my father was black and my mother was lighter than you, and she was not interested in color, but in the man she liked. My dad played the guitar, he was bohemian. They say my dad sang beautifully, I never heard him, I didn't have time to do it because I didn't grow up with him and I rarely visited him.

When my mother passed away I started working with my stepfather who was the one I knew as a father. He was a bricklayer. Mateo, a friend of my stepfather, was the first teacher I had as a bricklayer, and so I did odd jobs. I remember that I earned 50 cents, despite the fact that the payroll said it was three pesos a day, just like the other apprentices, who were paid. It means that I was exploited. The day I found out I had to put that down. I started at 12, picking at 13. So I quit and went with a man who was a painter, I didn't even like painting. Then my aunt wanted to become a carpenter, and I didn't like carpentry either. In other words, I went from one job to another, and they didn't pay me.

I was always singing, until I went with my mother's sister and his husband to a place in El Caney; a place called Rajayoba, I never forget. I went with him to plant, to cut down mangoes, and to chop coal. When my aunt's husband left for Santiago, I would sing, very loudly. I really liked tango. In the mornings, I would throw a machete and a chant. One of them was En un beso la vida, played by Ernesto Gómez, who said: "By kissing my mouth, you told me / only death can drive us away / and the kiss you gave me was so deep / that now my life has abandoned it."

I think I was one of the first in Santiago de Cuba who sang tangos, boleros type. I introduced tango in boleros and, you know, moved antics and stuff. I was 13 years old, looking for 14. I stayed in Santiago until '57, and that year I came to Havana. I came here to find my life.

The first orchestra that I performed with is today called La Ritmo Oriental, Elio Revé's orchestra. But I did not last long, because Revé, how can I tell you… it was very difficult. I didn't like it because of its shape. So I sang with an orchestra far inferior to his, which was Lázaro y su Microfono. But I was a man who was never afraid to work, my life was spent doing hard work. I'm a little chubby now, but I never weighed more than 120 pounds; I was always skinny, but I had legs that were very strong, very nervous, and 325-pound sacks passed through this little shoulder. I was working and singing at the same time.

I worked with Benny Moré in the late 1950s. It was a very good experience, the orchestra in which I was the best. Doing the chorus I felt like I was a lead singer. Because of the treatment of Benny, who was a great person. Wow, I don't know, I can't explain what he was like. Magnificent in every way. He was interested in you, he looked at your work, he didn't exploit you, especially. He said, no, no, no, no, give me 700 pesos, but give my musicians a thousand something. And then you would tell him: "Benny, I need 20 pesos," and he wouldn't charge you. He was very sorry that I was leaving. In itself that was not my position, I went with Benny almost on loan.

My place was with Pacho Alonso. I enter his orchestra on the condition that he sing the boleros and I sing the moved numbers. But when Benny emerges, things changed. He began to sing moving songs too, and I had to do chorus, chorus and chorus. Sometimes I would sing a number when we opened and when we closed, but it was no longer Ibrahim singing with him. I was from '52, until '65 that we separated, as a choir.

I always had an interest in singing boleros. So he [Pacho Alonso] was the first to say that my voice was not for boleros. In the year '62 we traveled to Paris, to the L`Humanité Fair, and we stayed for 21 days, then we went to the Brno Fair in Slovakia, and then the Soviet Union hired us and, instead of returning to Cuba, we went there. In the Plaza Pigalle, in the Cabaret Samba, between Carlos Querol and I we sang the number of Santa Cecilia, and the ovation was so loud, that they asked us to repeat it, which we did. We returned in ʼ63 to Cuba, because the October Crisis in the Soviet Union caught us. Carlos Querol was also a mother bolero player. There is a number called An immense force, which is the only bolero that I sing after we part ways with Pacho. Twenty-odd years ago that was the only one who let me sing with Los Bocucos.

I am the founder of Los Bocucos. The oldest in Los Bocucos, after Pacho, was me. I retired in ʼ91, I said that I did not want to continue anymore because at the age of 70 I am going to be fighting to sing a bolero, if they are telling me that my voice is not good for that. I was very vexed, so vexed. However, I was there struggling because I said to myself: this group was made by me, like that one, who arrived 12 years later, is saying that he is bored with me, if I am the one who has to be bored with him, because I am the most old man, and I'm not saying it because he's the director. So I endured until I finally decided to retire, and I said I don't want to know anything about music anymore. I dedicated myself to living off my pension and what I did: I cleaned a little shoes because I didn't want to sing with anyone. Many looked for me at my house - there you can ask my wife - from the Manguaré group, for example, they went to see me and I said no. I was really very disappointed, boy. I didn't want to know about music.

Well, I was at my house one day, cleaning a pair of white shoes because I had finished greasing the water motor. When I feel that they whistle at me and Juan de Marcos appears. I didn't know who he was, then I found out that he was the director of the Sierra Maestra group. Then we started talking and he told me: “hey puro, I came to see you because I want you to do a job for me”. I thought he wanted me to clean a pair of shoes or dye him, because I dyed shoes too - I dyed them white, that's difficult, from black to white, from red to white and it wouldn't let go, what do you think?

I was not going to participate in that group, I went to record a Mozambique, María Caracoles, for Juan de Marcos' album by Afro Cuban All Stars, which had nothing to do with Buena Vista; however, I record that number and when I come to watch, I am in Buena Vista, I have become the owner of Buena Vista. Why? Because while one recorded a song, the other recorded half of the other, I recorded four numbers alone, I participated in Chan Chan, El carretero, El Cuarto de Tula, Amor de loca joven y La Bayamesa. I just sing in all those numbers. And when I arrived all those people were there, the last to enter was me.

My first album is this one that is here, Buena Vista Social Club presents Ibrahim Ferrer. But mind you, look at this album, and take a look at the other one. [1] In this one there are different themes to those of that one and, if you start to analyze, different rhythms and unpublished numbers, of Cuban music.

At the meeting to talk about the album was Ry, Chucho Valdés, Demetrio Muñiz, Manuel Galbán and myself. Ry was sitting in the booth, I had a cold, please, and he asked me if I had any numbers of mine, but like before, other people had told me that my numbers didn't work, so I abstained. I am not like certain owners of groups, that if they are singers, all the numbers are theirs. I would always like to sing a number of my own, but I'm not into that “mine” treat, because I also have friends, and others who are not friends who have good numbers that they have given me. In the end, Ry told me to put my numbers, but I put two nothing more, so we did Cuban music.

I remember that Chucho became so great you so; and I say: "fuck, still there, boy ...". Then I call Demetrio: “Damn, compay, how sticky that was. And it quickly comes to mind, because I had conceived the letter for a long time, but I was looking for the center, the prayer. So I tell Chucho: “don't forget the melody, but now we are going to make 'music, my Cuban music” - we already had the chorus - and then Demetrio comes out and says: “Many greats have sung”, and it's who puts that part. Everything else is mine, that's where he was born. Right there we said: "let's record it", pao, and we recorded it.

I have traveled the world, I have two albums, and Ibrahim is still Ibrahim. Husband of Caridad Díaz. Grandfather, father, friend. This lady who is here will not let me lie, I like to help, even those who did not help me a while ago. It's the way I've done things, not as revenge, but amicably. That's me. And here I am, singing boleros.

[1] ]It refers to the album Buenos hermanos, released on March 3, 2003, a month before this interview was held. 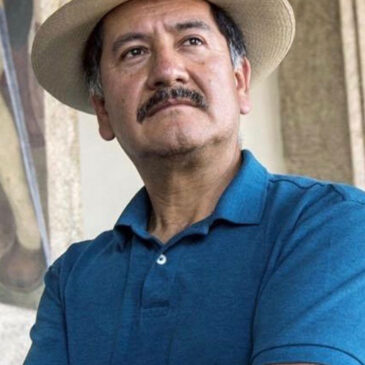