Looking at a Benny Moré record

He puts on his wireless headphones and goes out to the patio. The mobile that he carries in his hand has begun to play a song that triggers in him, at 16 years of age and in the middle of the confinement to which this pandemic subjects us, a liberating dance of random turns, arms that seem to want to unleash the flight and a soft smile of deep delight.

I have no idea what my son Mateo hears as he moves like a top with his eyes closed. For me his dance is mute; he chooses to be, in his ecstasy of a few minutes, absolutely blind.

Is it an instinct to listen to music and close your eyes? It occurs to me that by canceling visual information, the brain has a greater capacity to appreciate sound, but it can also construct the images that music suggests. The listener is free to elaborate in his mind the most dissimilar visualizations, related or not to the instruments and performers involved, with the title or the texts of the piece, with matters such as authorship or contexts of any kind. Everything disappears when you close your eyes.

Of course, music is enjoyed in many other "open-eyed" ways, both alone and in various companies, or within anonymous crowds. In particular, listening to recorded music has had for nearly a hundred years a visual moment that precedes the sound, a kind of portal that the music industry created to make its product viable. The music disc - the product in question - is worth the well-known baseball slang phrase "It's round and comes in a square box." But there are two important differences between a leather ball and a vinyl plate. The most obvious is volumetry: boxed sphere vs. disc in flat case. The truly decisive one is communicational in nature. The record case serves not only to protect its contents but also serves, in the first instance, as a diligent messenger that informs and seduces future listeners. Because unlike balls, a different listening experience beats inside each record case, a promise of unprecedented musical pleasure.

A bit of history (personal and non-personal)

What I didn't do until today was read it. Mea culpa. From Dominy Hamilton's introductory text, I learn today that the first sound recordings occurred in the 1970s of the 19th century, due to the simultaneous inventions of Thomas Edison and Guillermo Marconi on both sides of the Atlantic. The flat disc gramophone was invented by Berliner in 1895 and went into production at the end of the century. From 1910 the discs began to be packed in paper envelopes. All the recording information was then on the label stuck in the center of the disc, which was visible through a hole in the aforementioned envelope. It was some stores like the American chain Woolworth’s, and not the recording houses, the first to worry about better protecting the records, providing them with simple cardboard cases. These began to be individualized for specific recordings shortly before 1920, that is, a century ago. 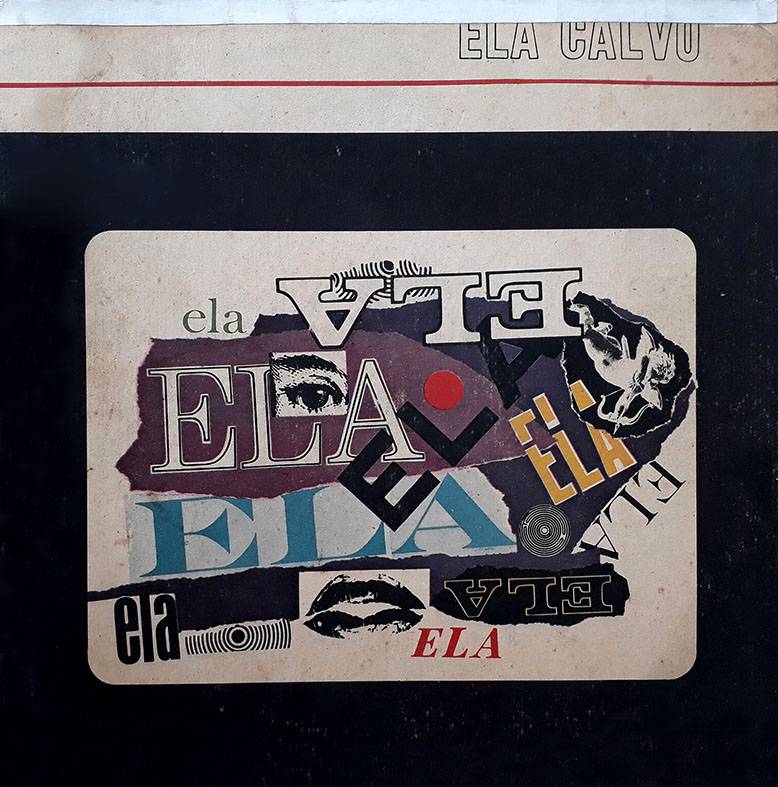 Design by MIguel Cutillas. Photo: Courtesy of the author

Finally looking at an album by ...

I gladly accept Darsi Fernández's invitation to look closely and comment in writing on these records that Rafael Valdivia brings me from his fabulous collection. He and I understood each other at once: collector passion is an incurable disease and the happy affected recognize each other as Freemasons. "I selected these 69 for you," he tells me, "which I chose because I found their designs interesting." It is mentioned later that Rafael has thousands of Cuban records from all eras, a true treasure. I, who archive about 1500 posters, can imagine the challenge of accommodating and preserving such a large number of (in this case) objects that take up space, weigh and collect dust.

Well, here I am in front of these images that are, like the highly regarded Cuban posters of the second half of the 20th century, witnesses of the time when they saw the light. In them there are traces of an aesthetic, a production system, social relations, even an ideology. What I can talk about - by now the reader will have noticed that it won't be music - is graphic design. And I am dazzled by so many interesting designs.

I reread a text that I wrote in 2007, in which I reviewed the milestones that marked the evolution of our graphics from 1950 onwards. It is quite comprehensive in genres, supports, entities, authors, etc. To my bewilderment, the word disco is not mentioned even once. Mea culpa 2. As I am aware that no other study on Cuban design has been published where a serious assessment of this issue may appear, I can properly say that the omission is total. Nobody has bothered to study it, being a production of images adjacent to the most fertile terrain of Cuban culture: music.

If Rafael Valdivia owns a few thousand albums, and the total national production will be several thousand, then these 69 are a drop in the bucket. A simple sample from which I should not, it is not possible, try to deduce any conclusion. They are almost all from the 60s, some a little later. Assuming that this is a time lavish in good album designs (I want to believe that based on the profusion of good recorded music), one can at least speculate that in design, records and posters coincide in their periodization. Between the mid-60s and the 70s, the so-called “golden age” of Cuban graphics is located, with very high levels for the poster.

Although it is not always explicit, the authorship of the designs of these LPs can give us other clues. Of the names that are repeated the most, only Eduardo Muñoz Bachs had an outstanding work in the poster. Other greats like Alfredo Rostgaard, Rafael Morante or José Gómez Fresquet Frémez barely have one album each. The seven by Bachs are very much in his style, based on expressive but humorous illustrations, portraying characters curiously in profile almost all of them, who walk, dance or play instruments with great ease. Unlike his serigraphic posters, the color here seeks - or ends up having, due to offset printing - a slightly contrasted key from more homogeneous tones. Only one of the covers uses the drawn letters, an invoice that in other media is one of its distinctive hallmarks. The album Guarapachanga, by Chappottín y sus Estrellas, is a Bachs of high carats, and a delicious cover at the height of the beauty that I presume sounds inside.

The other most successful design of this creator - like the previous one, from 1964 - points in a different direction. The simplicity and modernity of the cover of Ñico Rojas are admirable. It would seem that Bachs, needing to balance the composition of the name in such high score and the drawing that cannot grow any more, dared to bring the coupling to the deck, in a very bold and unusual solution.

The Italian based in Cuba, José Lucci, also worked for Icaic during the 60s. Here he shows himself with a pictorial vocation that includes figuration and abstractionism. It is surprising that this last language has been the option chosen in Cha Aragón Cha, an album designed for the international market. On the other hand, in Tres Cuartetos, his cover illustration, with incorporated calligraphy, solves well the challenge of not prioritizing one group over the others and avoiding photographic collage. It is an image of intense color and very successful composition, which is almost framed as a painting with remembrances of Mark Rothko or Raúl Martínez.

Design by José Lucci. Photo: Courtesy of the author

A different and no less effective solution for another edition of the same album (the one by Areito, this one from the Palma label, only with variations in the order of the songs) found Silvio Gaytón from exploring the geometric composition. This designer, who is spoken of little today, likes cut shapes and achieves compositions, colors and very attractive typographic uses. But he is also right-handed on the photographic cover for Mírame fixed by Los Zafiros. Roberto Salas's black and white snapshot, with the artists occupying only half the space, works very well alongside the decorations that Gaytón adds on the top edge and with the details of the back wall. The back cover repeats the same criteria. A conventional but well resolved design.

Something could also be said about the relationship between front and back of these designs. We must accept that the reading is done in two stages, starting with the cover or cover, whose mission is to capture the attention of the buyer (which is why they were created: to sell records), while the back cover offers less seductive and more factual information, and that In general, a consensus has been reached that the pair works better if they manage to be a unit. The back face was not always paid much attention, nor did it always have notes.

Among the albums I review there is one by designer Roberto Quintana with a shocking cover and a failed back cover. As powerful as the image of Gina León is on the album of the same name, it is weak when turning the case, even though the elements are almost the same. For some reason Quintana decided not to repeat the beautiful typographic composition on the front behind, creating another one in a certain arbitrary way. The penetrating gaze close-up exceeds the frame and expressiveness of the photo from behind. Anyway, this is an ambiguous case. Of course, the cover could still be put on any FNAC today.

Design by Roberto Quintana. Back cover. Photo: Courtesy of the author

I save my breakthrough artist for last. In Miguel Cutillas, a name that I think I have once heard from Héctor Villaverde, I discover a designer who is skilled in many ways and very daring. The four albums in front of me assume, each in their own way, communication challenges, that is, risks to fulfill their advertising function.

For Ela Calvo he proposes a typographic collage dotted with a couple of vignettes. The repetition of the singer's name in various fonts includes some upside down and even cut off. A wide black frame brings calm to the whole and the full name in the upper corner ends up saving what seemed an undesirable path.

In Vía libre that Pacho Cutillas arrived, he ventures into abstraction. The cover's composition of colorful letters and arrows on a black background expresses great creative freedom. They can be interpreted as traffic signs but in any case it is consistent with the attitude of absolute security expressed in the title of this album. Pacho Alonso has a free hand with his music and Miguel Cutillas with his design.

Design by Miguel Cutillas. Photo: Courtesy of the author

Finally I look at this Benny Moré album. What a beautiful transcription to the design of the wild and free spirit of a huge artist. He seems to want to tell us that a single photo cannot capture so much life, so much talent. Benny multiplied in the negative strip and in the reiteration of his name, Benny to the right and to the side, singing surrounded by other musicians and people. The camera has gone on stage or he has come down; he looks at us, smokes, laughs, conducts the orchestra and sings. It is in its sauce. The merit of this design is to have put a lot of life into a deck, a lot of Benny. And since there is no accent in Moré, for whatever reason, then it also works in English: More Benny, in red. Cutillas, how good you design. 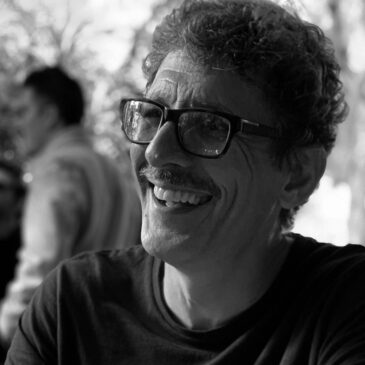