Carmen París, a heretic from Zaragoza in Havana

One day in his thirties, the Aragonese born in Catalonia, Carmen Paris —- very green eyes, thinness that hides a temperamental force, easy laughter— - decided not to act more on-demand at the hotels on the coast, full of retirees who took the Sun.

——I was doing everything: zarzuelas, the chorus for salsa, rock and roll groups. To live I also had to sing at weddings, baptisms, and communions. When I had four summers in the same, I sat down and said to myself: "You are not going to continue singing the successes of the year. They are getting worse and worse! "There I decided to create my language.

She tells me in Havana, many years later. It is October 2019 and this Saturday will perform at the National Museum of Fine Arts at three in the afternoon. Her first official concert on this Island. The road has brought her back to the capital where she lived four months in 2007, to give birth to one of the most amazing albums of her career: Incubando (Warner, 2008). But we have not yet reached this point. Flashback.

When one inquires about her he learns that he studied piano, song, and guitar, he likes to read about Egypt and other ancient cultures, he wore the Rastafarian hairstyle and his first band was called Jamaica. She was once labeled as a pop vocalist, she played Renaissance music, she studied English philology ...

—-When I was young I was very curious, what happens is that as they say in Spain: apprentice of everything, teacher of nothing-conversation.— She says and laughs the first time of many during the conversation.

When he considered doing his career, he saw it natural that his style was eclectic, a mixture of everything, but fundamentally revindicating the roots of Hispanic culture.

That change of direction took her to her first album, Pa' mi genio´ mi genio (2002) that sold more than 40 thousand copies in Spain. He dazzled with his reinterpretation of the jota, a traditional Spanish dance, and a song that has since been the hidden diamond at the bottom of most of his work. The following year she was awarded the 2003 Music Award for Best Traditional Album; Best Traditional Album and collaborated in the phonogram tribute to Joaquín Sabina Entre todas las mujeres. For his interpretation of Calle Melancolía the Newspaper of Aragon called it "the most heartbreakingly Sabinian voice" of the CD.

In 2006, once again, a Music Prize for Jotera lo serás túwhere you already appear —- between Aragonese singing, Brazilian and Mexican rhythms -— some Cuban genres such as Havana and Chachacha. But that passion for the Greater Antilles would go above the level in its next production.

One of the promotional images of Incubando showed her with a nest-shaped hairstyle, with eggs whose shell tucked a pentagram, with notes and everything. It was the birth of a new Carmen. The CD opens with a song by Raúl Paz, the song Veinticinco años that makes her fell in love with when he sang with the Cuban at the Grand Rex in Paris. In the album I would do it in duet with Santiago Auserón, aka Juan Perro, never sufficiently weighted here as the international ambassador of the Cuban son. To top it off, Haydée Milanés " jotea " with Paris a poem by José Martí dedicated to Aragon. Epilogue: Incubando Incubating was the Best Fusion Album of the 2009 Music Awards. 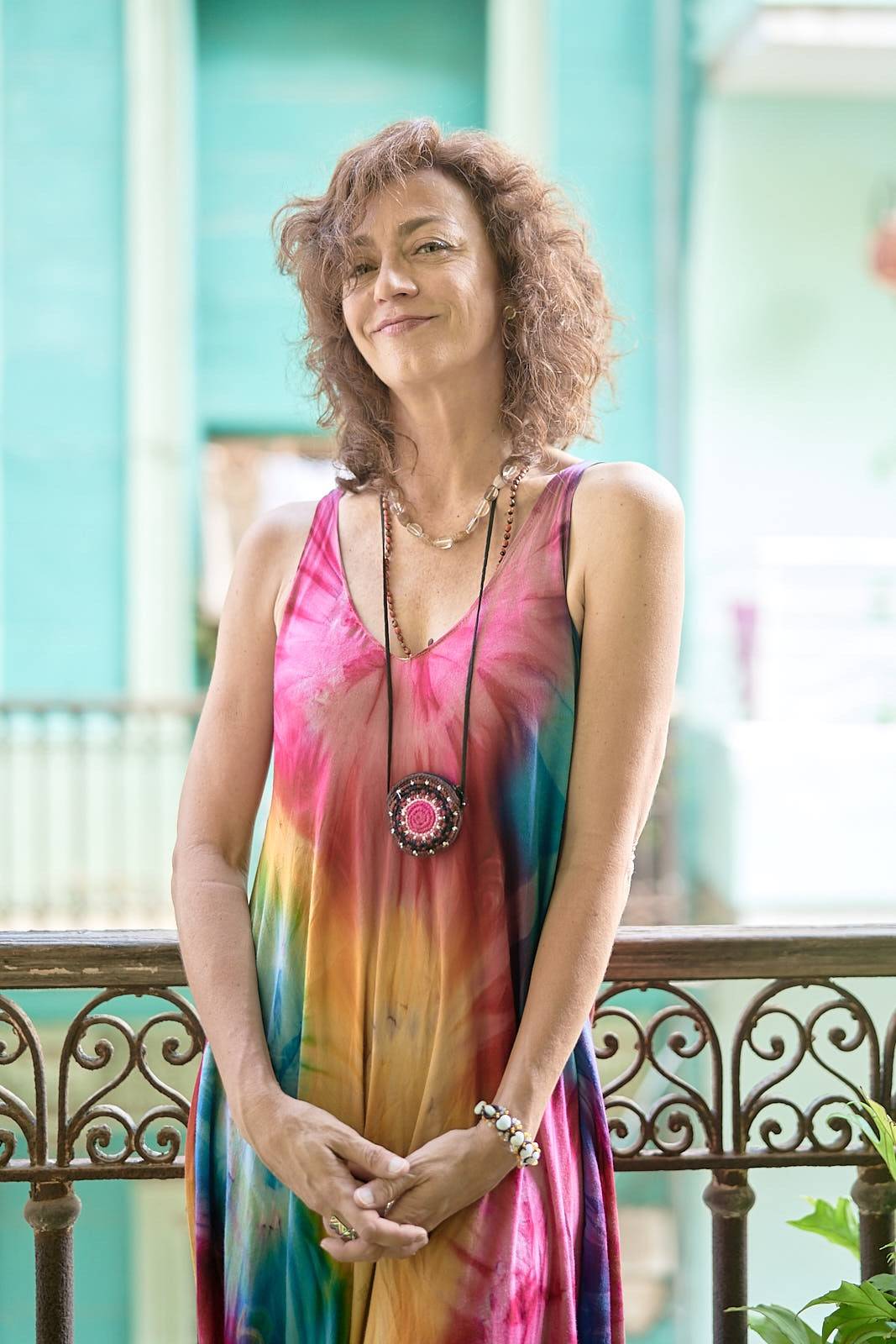 Today, in addition to great classics like Benny Moré, Snowball and those signed for the Buena Vista Social Club, Carmen Paris has among its references contemporary artists such as Alain Pérez, Yusa —- "I love it, it's wonderful" -—, the band Habana Abierta ...

For all that he is happy to return to Cuba, a land he had been physically absent from for too many years. Since he chose the path of the independent artist he had not been able to come. Once they invited her to Cubadisco, "but of course, as there are no means and I didn't have them either to have assumed the expenses because there was no way".

The door opened this year. She entered the catalog ofthe Spanish Agency for International Cooperation and also received one of the grants from the Ministry of Culture of his country for tours abroad. The Havana concert opens its first American tour, which will continue with presentations in the Dominican Republic, Miami, Jamaica, and Mexico, where he will sing with Ibrahim Ferrer (son).

—- I mean, Cuba surrounds me. Wherever he goes, he is the protagonist, "she says.—, dice.

She clarifies that the Cuban influence arrived before his Havana stay in 2007. He even says about Calle Melancolía Calle Melancolía (one of the very few references of his that the public of the Island would have for years), which was a good introduction because she " acubaneó" for Sabina that song, so melancholy, so sad.

How was it possible? At twenty, still in Zaragoza, Carmen Paris met Liudmila Mercerón, granddaughter of one of the pioneers of the danzón, who introduced her to the study of the sounds of the Antilles. When she moved to Madrid she frequented other Cuban musicians.

—"That's how I learned about polyrhythmia and the whole afro root."

——Even I think you use some piano tumbaos…

——Yes, yes, there are. Learn to "lay down" ... Eh ?! For me that I am as you say: "a Galician", that is not easy. I am numbered of all the music that I can, even the last thing I did was an album next to the Moroccan Nabyla Maan (Dos Medinas blancas2017). I take from everything I collaborate, in everything I participate, if it was not before, from that moment on it is part of my influences.

A map of Carmen Paris's extraordinary journey through music is En Síntesisthe show she presents on her tour and conceived to celebrate her 35-year career. She will be accompanied as guests by Raúl Paz and Luis Barbería, from Habana Abierta, with whom she sang Del cielo a mi vidaa beautiful subject of Brazilian influence.

At the concert there is a concept of the minimum show, he tells me because he brought two musicians: the Uruguayan pianist Diego Ebbeler and the percussionist from Madrid Jorge Tejerina.

—"With them, I offer a selection of my four official records." For a few years that is my usual format. A decade ago I had a major band, but then came the crisis and began to reduce all bands. I have an even smaller format, it's me playing the piano.

—"No, the jota is upside down, he has a lot of musicians, he plays with rondalla, there are guitars, laúdes, bandurrias and a lot of people." I use other instruments than the traditional ones.

—- And in traditional music how it looks: is it a religious or a heretic?

—"More of a heretic than a religious, yes, because I am not fundamentalist." Something that I have learned since I started to release records is that the jack has influenced many kinds of music. I joked that the jack is the mother of the lamb, first, the jack was invented and then everything else. But I am discovering that this genre, the fandango, and the 17th-century Spanish bolero, have had a lot of strength in the world.

"Then they ask me how I can fuse it with Cuban, Uruguayan, or Mexican music, and I say: because they are not foreign, it is not so rare. If I did it in Ejazz con jota with American jazz that is more foreign, in principle, the more I will do it with Spanish-American music. All are related through Iberian folklore. "

That rare quality of promoting and at the same time subverting his heritage, earned him that in November 2014 the Ministry of Culture of Spain presented him with the National Prize for Current Music "for his courage and his international work in the dissemination and renewal of traditional music "

—"I do it because it is a sign of identity, but I already tell you, I am a heretic," —he confesses,—, "until when I sing jota because I am interested in knowing that the quintessential Spanish music is not the famous flamenco, but this. It is the only one you can find in Galicia, the Basque Country, Castile, Aragon, Valencia, and in Catalonia even if they don't say it there are also jotas ... Even in Portugal! It is common throughout the Iberian Peninsula.

It is also evident that Spanish music is on the substrate of the entire Latin, from above Mexico to Tierra del Fuego, including the Philippines, where the Manila Galleon arrived. There was a very rich exchange, which gave rise to a lot of variety in rhythms and genres, that's why it's so sad that reggaeton is today the representative of Latin music. "

—- What current and future do you see this more traditional music in Spain, in the world?

—When I went out with the Warner in 2002 he was very lonely. After little by little people have been appearing doing things similar to mine, or updating the folklore of Asturias, Galicia, Extremadura ... I think more artists are investigating because, let's see, what we can not do is follow all the homogeneous models that the Anglo-Saxon market system imposes on us. In today's world, so interrelated, I believe that the future of music is miscegenation, twinning. "

Her new project for 2020 is to prove with a record the thesis that the jota spread throughout the world. She is investigating songs of that genre (or close to his style) in Mexico, Colombia, Venezuela, Argentina, Uruguay, Chile, the Philippines ... In Cuba, ironically, he has not found it. The closest thing he has heard is Guajira music, the accompaniment of the sudden ones that closely resembles that of an Aragonese rondalla.

——I'm excited about this project. I love finding elements that unite, I focus on things with an integrating spirit.

——And if you can't find jota in Cuba… won't it appear on the next album? —i provoke her

——There's the problem. But he already has an entire record, friend! However, I will invent something: what cannot happen is that Cuba is left out.